What does precision animal husbandry mean? Precision farming was essentially invented as a means of increasing productivity while using resources in a more precisely targeted way.

This is true for both crop production and animal husbandry. What are the means of increasing productivity? Or in other words: under what conditions can a living organism produce at the highest possible level in terms of both quality and quantity? When physiological needs are met to the greatest extent possible. Unfortunately, in modern animal husbandry, ensuring that physiological needs are met is not necessarily a priority. Among other factors, the subsidy system for agricultural production, which supports otherwise loss-making producers, plays a role in this. At the same time, farmers now have a wide range of tools at their disposal to increase both animal welfare and productivity – it is in their interest to explore these.

What does precision farming mean to for someone who keeps livestock? It means getting the most accurate and up-to-date information about your animals – preferably individualized data about each animal – and making the best possible, case-by-case decisions on that basis. Is it possible, through human labour, to get accurate and immediate feedback, 24 hours a day, every day of the year, on the activity, rumination, health, oestrus, heat stress panting, and other indicators about each animal? Of course not. This task is performed by precision devices that can be placed on animals to measure all these things through their sensors, and to upload the data wirelessly to a database. This data is then processed using the software purchased with the device, to be displayed in tabular or graph form, and at the same time is sent via mobile phone and e-mail. If necessary, alerts are also issued.

In cattle farming, for instance, we rarely deal with individual data – stock and herd data are much more important economically. However, let us not forget that each herd or stock consists of individuals, and the sum, mean, standard deviation of the individual data gives us the group result. Thus, the more accurate the individual data, the more accurate the overall group data – indeed, it is the totality of the individual data which adds up to the group result. If all this is connected to the milking parlour and its data, so that we know for each animal, per milking and per udder quarter, how much milk it produces and what the electrical conductivity of the milk from that quarter is, then we’re all set. We have obtained data which, after proper analysis, can significantly improve the condition, productivity and quality of the animals in a precisely measurable way.

Each piece of data is worth as much as the information we can extract from it!

Data is an interesting thing – a bit like a block of stone to the sculptor. There’s the masterpiece hidden within it, you just need to chip away the excess. The data must also be managed in such a way that as much of the information contained in it as possible can be displayed, because properly collected data represent the complexity of reality in a particular way: there is truth to be found there, as well as much else that we are curious about.

Raw data cannot yet be used to support decision-making, and often not even for an immediate alert. All data should be analysed in context. Such contextual data (in dairy farms) include the age of the animal, current fertility level, results of pregnancy tests, change of herd, treatment, number of lactations, information from other systems – e.g. from the milking machine – and much else that we could list. All this should be taken into account by software solutions, in order to develop the most accurate possible picture of the overall situation, and so as to be able to intervene if necessary to improve production results. Often, however, we find that precision tools and the accompanying software are insufficiently effective in and of themselves. What is needed is a specialist in data analysis (and of course also in animal husbandry) to transform reams of data and graphs into useful technical advice.

How does the use of precision instruments help and support animal welfare?

Precision tools provide direct feedback on how the animals are tolerating the technological environment, the fodder they are living on, and the conditions in which they must produce. We can also receive alerts when animals are in danger. For those keeping cattle, one such everyday danger is, for instance, calving. Our animals require a significant amount of human help to give birth to healthy calves. Faulty functioning/operation of livestock holding technology can also pose certain dangers, for example the improper application or inappropriate use of floor, paddock and neck clamps, to which animals generally respond with increased activity. If we can detect this activity in time, we can intervene. Inadequate quantity or quality of feed can also cause significant problems, and animals can give us indications of this, so long as we have the means of detecting them. However, precision instruments are not only useful for eliminating hazards. Livestock holding technology can also help us optimize the physiological, and in the best case also the ethological, needs of the animals, improving their wellbeing and thus also their productivity.

Let's take a look at a practical example

In 2020, the Hungarian Research Institute of Organic Agriculture (ÖMKi) launched a series of experiments focusing on the precision monitoring of free-range beef cattle. Grazing, the time of year when the cattle are put out to pasture is – however advantageous it may be for the free movement and natural behaviour of the animals – a blank space for the farmer, and during this period he or she is generally oblivious to all but the most serious problems, or their consequences.

This is because stress factors can occur while animals are out to pasture, from which, in the absence of appropriate intervention, the animals can suffer, especially if no attentive animal caretaker (cowherd) is there to notice and remedy the problem. However, behaviour changes resulting from adverse conditions are indicated by sensors even when there is no competent human supervision nearby.

Some animal welfare issues which may arise while cattle are out to pasture, and which may require the farmer’s intervention:

In the research it conducts, ÖMKi employs sensors that are already used in daily practice, but which are still only used on some dairy farms, chiefly those involved in intensive animal husbandry. However, if these sensors could be used on pasture as well, they could help make the invisible visible – that is, we could combine the physiological and ethological benefits of free range with the quick, individualized interventions provided by accurate data! In this way, not only can the welfare of the animals be further enhanced, but also their productivity. Cows can be better mothers and calves can be healthier. At the same time, emissions of specific pollutants are reduced. This means that per unit of weight gain, animals produce lower amounts of ammonia and methane, and consume less water and fodder.

What sensors are we testing and what can they measure?

We use external sensors, which are often employed in crop production to measure temperature and humidity, as well as wind-speed i.e., meteorological indicators. These inform us about the environment. We also use animal-mounted sensors, which collect relatively little information, but do so from multiple parts of the body. They chiefly measure temperature and activity, as well as, occasionally, other functions, e.g. a microphone may help them to operate. Some specialized devices are placed inside the animal, such as the rumen bolus, which, in addition to measuring activity, also shows internal changes in body temperature (e.g., as a result of drinking water). Although these devices collect relatively few kinds of data, they can provide a lot of derived information, such as: 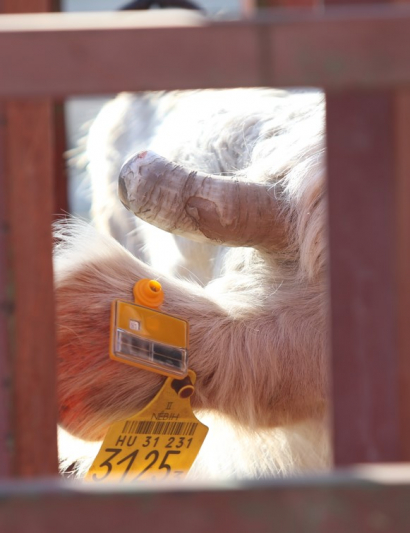 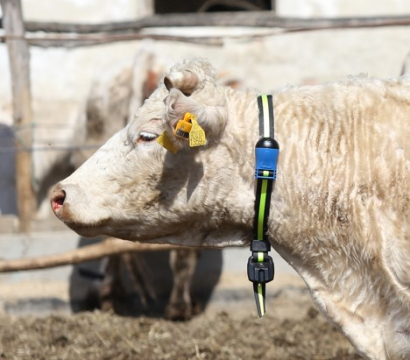 Figure 2: A group of sensors is located on a neck strap 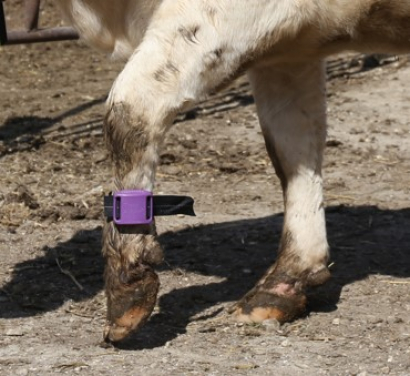 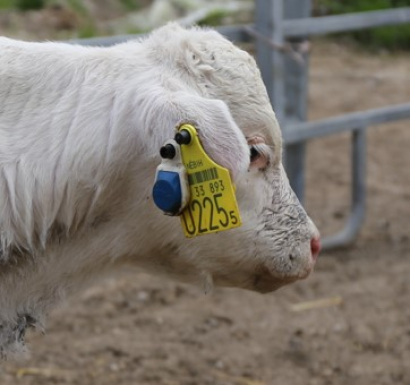 One vital issue, especially on large pastures, is how to receive the data from the sensors. For this, solar-powered receivers are recommended, since they can either be fixed in place or mobile, as we figured out over the course of our research. 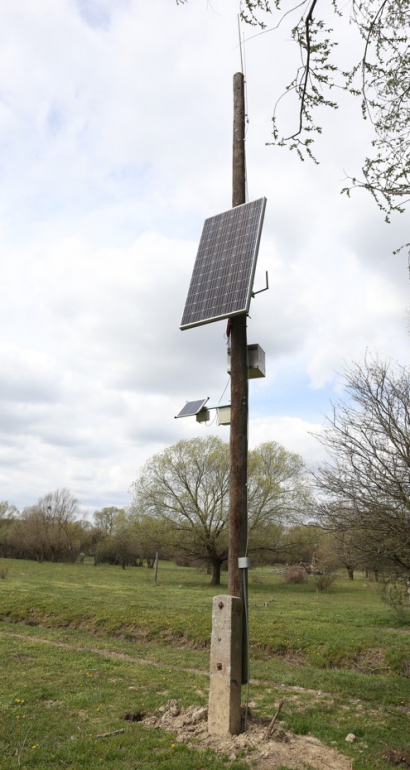 Figure 6: Mobile receiver, which tracks the movement of the herd

In most cases, both solutions are needed. Fixed receivers should be placed around water troughs and winter accommodation, while the mobile receiver should follow the animals on pastures without coverage.

Some useful data about animals

GPS tracking provides visible information about the herd’s location on the pasture. In figure 7, the light blue spots represent calves, while pink spots are cows, and the dark blue is the bull. The dots with broad red circles around them show those that have moved outside the designated pasture. Figure 8 shows a state of fever, with increased activity, while Figure 9 shows water-drinking across time, as made visible by the rumen bolus. Figure 10 shows the change in rumination time on a pasture with poor carrying capacity, during the spring of this year. Based on the sensory indicators, at the time marked by the red arrow, forage replacement took place on the pasture, which increased the average rumination rate. 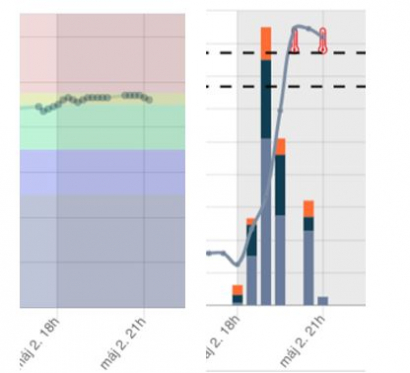 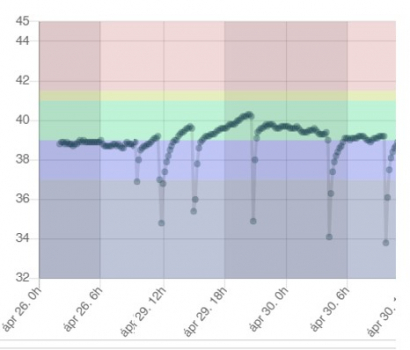 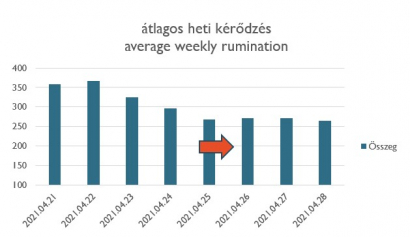 Figure 10: Average weekly rumination of a herd, in minutes

One of the essential elements of precision farming is to have the most, and the most accurate, information about the condition of the animals, as well as information which is fresh (preferably instantaneous) and which accurately reflects the reactions of our animals to their environment. The most quickly, precisely, and effectively we can intervene to correct problems in the animals’ environment, the more effective the precision solutions will be, and the more we will be able to achieve our animal husbandry objectives. The essence of the increasing number of precision solutions in intensive animal husbandry is to further increase the efficiency of industrial husbandry, while also bearing in mind the physiological condition of the animals. However, precision tools may also be suitable for further increasing animal welfare, meat quality and productivity in free-range animal husbandry, while also allowing animals their natural living conditions, and the opportunity to behave naturally. In our research, which will continue until 2023, we will continue to conduct experiments examining these issues.