Within the RELACS project we collected information on the practice of nutrient management from the managers of 10 Hungarian organic farms that are cultivating arable land. We mostly selected farms that only grow crops and not those that rear livestock, since nutrient management is more challenging on these farms. As well as looking at the methods farmers apply we also wanted to know what the motivation behind their decision to go organic was, and what kind of everyday challenges they have been facing. The following summary has been compiled from the answers they provided. From the participating farms, two cultivated less than 15 hectares, there were two farms covering 15-50 ha, three farms covered 50-100 ha and three farms operated on arable lands exceeding 200 ha. Nearly one-third of the farms switched to organic farming after 2017, three farms have been operating organically for 10 years, and four farms have been doing so for more than 15 years. 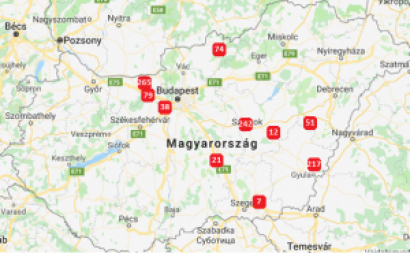 Location and size of farms participating in the survey (ha)

Between 2015 and 2017 spelt was the crop that was sown most frequently by the farmers that were interviewed (based on its frequency of use and not the size of its area). It was used 19 times during this period (almost twice the number that sowed winter wheat). The second most frequently sown crop was alfalfa, which was sown 17 times as a main crop. The third most often sown plant was mustard, which the farmers mainly used as green fertilizer.

The practice of nutrient supply

Half of the farmers said that they mainly rely on external sources of nutrients. The two main nutrient sources were organic fertilizer and various processed (pelleted/granulated) animal manure, which were used about 50-50%. The farmers tend to prioritize materials that are easy to handle, and can be put on the soil using manure or fertilizer spreaders. More than a third of the farmers use some kind of microbiological products or inoculums to facilitate the degradation of organic materials and to ease the uptake of soil nutrients in plants. Only two interviewed farmers applied leaf fertilization, while only one used liquid fertilizer.

Most of the interviewees (7) mentioned the lack of nitrogen, and the second most reported issue was the lack of lime in the soil (6 respondents). Half of the farmers also thought that the humus content of their soils was also too low. Regarding macronutrients, the lack of phosphorous was mentioned four times by the farmers, while potassium was mentioned three times. In terms of microelements zinc deficiency was the most frequent issue (mentioned 4 times).

Three farmers complained that the Nitrate Directive had caused them problems by restricting the use of a proper amount of organic manure on their fields.

The last part of the survey contained questions about the use of alternative recycled materials. The majority of the farmers (8) said that they would try household waste if it were available in an easy to use form. Garden and park waste also seemed to be a good choice for a number of them (7), although some interviewees stated that they would only use it as long as did not contain any plant protection agents. Half of the farmers said that they would try bone meal, blood meal or similar nitrogen supplies, but some said they would only do so if these could be obtained from non-conventional sources. Sewage sludge and its by-products were the least favoured options (refused by nine and ten respondents respectively).

Six of the 10 interviewed farmers use no-tillage/minimum tillage technologies, and all of them mentioned that they have noticed a more active soil life as a result (more earthworms and plant residues decompose faster). The farmers’ answers suggest that they are motivated towards going organic by the desire to protect the environment and their own health rather than selling prices or more favourable market conditions. The latter was not even considered by the majority of the interviewees, since they often do not feel that they are in a more favourable situation than conventional farmers. This is especially true for smaller farmers, who in some less favourable years cannot even produce enough plants to fill a truck on their own, meaning that they are in a more vulnerable situation in terms of sales.

Later we will report on how the various nutrient management methods can be evaluated from the point of view of maintaining soil fertility, based on the data from the survey. By taking into account the results of the soil analyses of the farms, the amount of materials spread over the fields and those withdrawn with the yield during harvest, we will investigate whether the nutrient supply methods are able to compensate the nutrient loss taken away from the fields during harvest or not.