As a part of our arable crop research activities, we are studying various cereal species and varieties at 15 different sites in Hungary. These plant stands are also investigated during plant health inspections a number of times every year. The aim of this research is to find the best performing and the most pest-resistant varieties for different habitats under organic conditions. 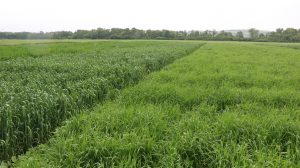 Besides modern bread wheat varieties, ancient cereal varieties like einkorn, emmer and durum wheat also have special traits. For example, some of them grow long stalks, which leads to the problem of lodging (just think of those weird crop circles 🙂 ), but they have such a high-quality chemical composition that these varieties should be combined with supporting plants or lower wheat varieties.

Apart from stamina, yield level, and quality, we also evaluate the weed suppression potential of the different varieties. This is an important issue in organic farming as we only apply mechanical weed control. In addition, resistance to diseases is a high priority, especially in the case of head fusariosis, due to which harmful mycotoxins may appear in cereals if they are stored inappropriately. 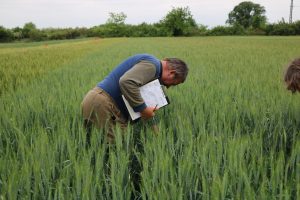 Last but not least, we also study the vigour of the plants by recording their phenophases. In practice, this means we record the date when a certain ratio of the plant stand reaches a specific developmental stage. Did you know that one of the developmental stages of cereals is called the “milk ripening”? At this stage the seed is already close to maturity, but when pressed it is not hard, and a milky liquid will come out of it. This stage should not be confused with full ripening when the seed is already dry, hard and ready for harvest. 🙂

During the 2019 plant health inspections Szilvia Bencze, Mihály Földi and Bence Trugly helped Péter Hertelendy, who has been the plant doctor in charge of plant health evaluations related to the arable crop research at the Hungarian Research Institute of Organic Agriculture (ÖMKi) for several years.